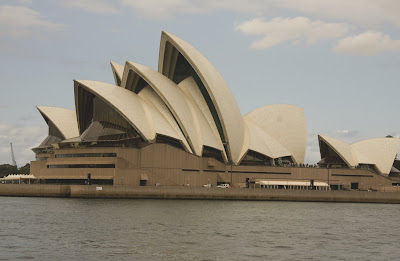 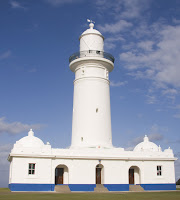 Last month I recommended Bill Bryson's funny yet educational book on Australia, "In a Sunburned Country," to my wonderful book group. I had first read it seven years ago when my husband John and I drove down the east coast of Australia, from north of Cairns to Sydney. There we had turned in the rental car and taken buses and ferries around this magnificent city while John worked there for two weeks. We both thought Australia was nearly perfect, much like we had found California when we settled there in the 1970s. We were surprised to find that Bryson had similar feelings to ours about this iconoclastic island country/continent. 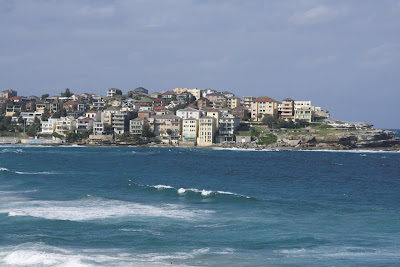 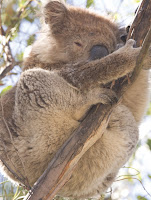 Recommending the book to my book group last month, I figured, would nudge me to focus on what Bryson wrote about the parts of this vast country that I had not visited in 2002, but which I did visit in March and April of 2009, when I succumbed to Quantas' inexpensive airfares. My friend Annette and I planned a month's trip which involved landing in Melbourne after a non-stop flight from Los Angeles, then flying to Perth, Uluru, Darwin, and Sydney, our departure city. 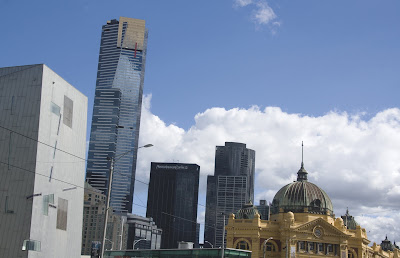 Melbourne inspired us as the country's cultural capital, a place where art and the buildings that house it are held in high esteem. The National Gallery of Victoria, the Melbourne Museum, and the Ian Potter Museum are all well maintained and full of excellent work. I was amazed at the number of theaters with their big productions, including a fantastic version of Billy Elliot I caught one evening. 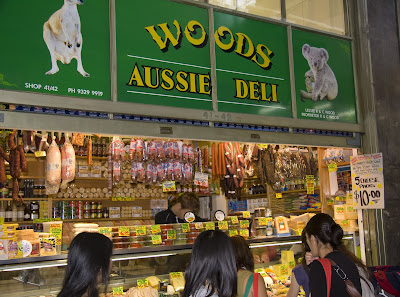 The effiicient tourist information office in Federation Square offers tours of just about any place anyone would want to see and learn more about. On the tour of Victoria Market we not only saw some of the most beautiful food I could imagine, we got to taste it as well. We sampled enough we were able to skip lunch. 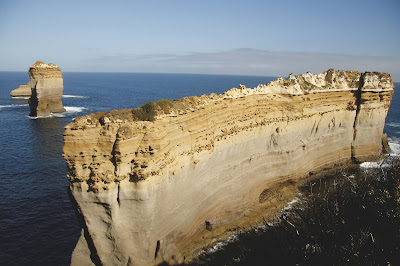 Our bus trip down the Great Ocean Road yielded spectacular coastal views but involved too much driving for one day. It would have been better divided into a two-day trip. 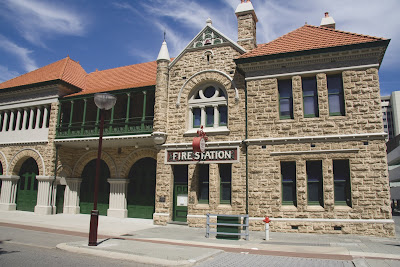 Flying internally with Quantas was always a pleasure, with a far more relaxed feel in the Australian airports than we find in the United States. Our flight to Perth, on Australia's west coast, was over five hours long, but very pleasant.

The region actually includes two cities, Perth and Freemantle. I fell in love with the area's casual feel and beautiful beaches. We stayed in a time share I had traded ours for in the Swan River Valley, north of the urban areas. Kangaroos entertained us daily as we ate our breakfasts, romping on the golf course outside the glass doors to our condo. 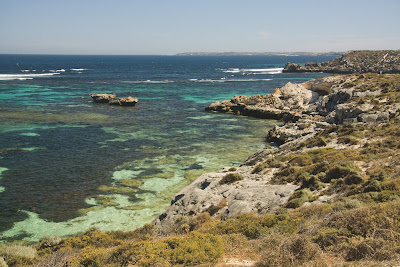 The area's highlight was an excursion by local ferry to Rottnest Island (aka Rotto) where we rented bikes and rode around the approximately 11 by 5 kilometer island. Another transportation option, since visitors aren't allowed to bring cars, is to take the bus which circumnavigates the island, stopping at all of the beaches. (One is pictured above.) 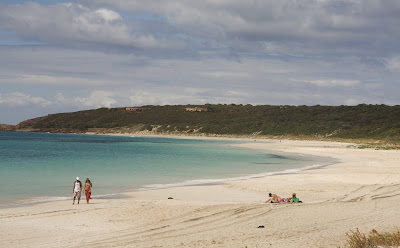 We also visited the famous wine growing region near the town of Margaret River, about 150 miles south of Perth. It is lovely and tranquil, known for producing many of the country's premium wines. There were some pretty nice beaches in that area too, like the one above. 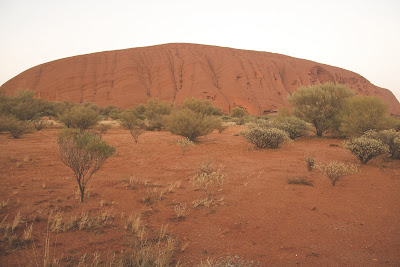 Our next flight took us to Uluru, formerly known as Ayres Rock. I had wanted to visit this mythical region for years, so for me this was a dream come true. It is a sandstone rock formation that stands 1,142 feet high and changes colors in various lighting conditions. According to tradition, the best way to see it is at dawn, when there are a whole lot of other folks there. It's also the coolest time of the day, and the heat in the region is legendary. 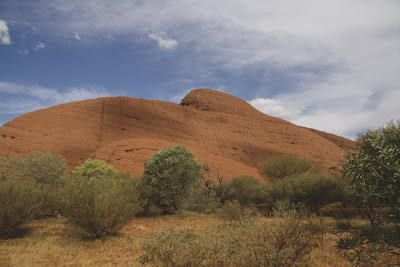 Uluru is in Uluru-Kata Tjuta National Park along with another impressive rock formation, Kata Tjuta (aka The Olgas) about 16 miles from Uluru. I found these rocks to be a pleasant surprise, since most of what we read about the region focuses on Uluru, often used as the symbol of Australia. Both sites are very important to the culture of the local Aboriginal people. 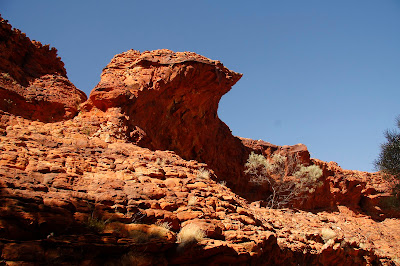 On an early morning bus ride to Kings Canyon, part of the Watarrka National Park, we saw wild horses (brumbies), wild camels (introduced from Afghanistan to help build the railroads,) kangaroos, rabbits, and even the illusive echidna, which, along with the platypus, are the world's only egg-laying mammals. When we got there, we took the 3-4 hour Kings Canyon Rim Walk which traces the top of the canyon. There we saw spectacular views of the gorge below and of the surrounding landscape. 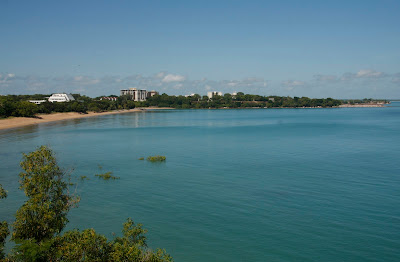 The shortest flight we took was to Darwin, in the far reaches of the Northern Territory. Darwin struck us as a place for independent-minded folks due to the remote location and the inclement climate. It seems to be hot year round, during both the "wet" and the "dry" and have a plethora of dangerous critters like the mythical salt water crocodiles. The city had to be rebuilt twice: after Japanese attacks during WWII and after Cyclone Tracy in 1974. 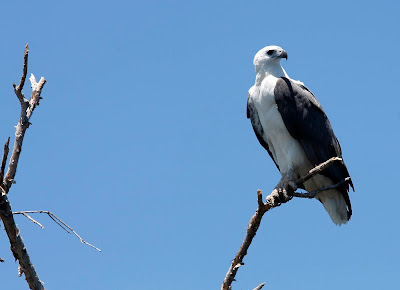 The highlignt of our visit was an overnight stay at Kakadu National Park, where we saw a lot of wildlife and a brilliant array of aboriginal rock art.

Another long flight took us to Sydney. Although it had been seven years since my last visit (a beautifully orchestrated Olympics had taken place since then) I felt completely at home there. My choice of public transportation is the ferries, which get you where you want to go while giving you fantastic photo opportunities along the way. The photos above and below this paragraph were both taken from the ferry on the night before our departure on a comfortable Quantas non-stop flight to California. 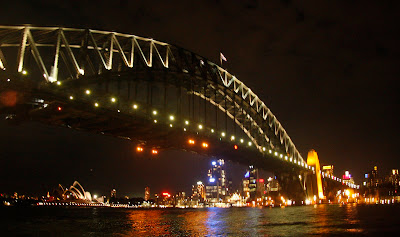 We had a fantastic month exploring Australia. And thanks to my book group and Bill Bryson's account of his travels there, I was able to live it all over again last month when I reread his "In a Sunburned Country." 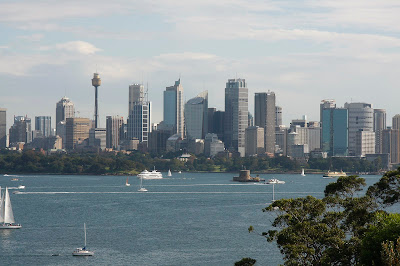